Today marks the first anniversary of the killing of Andrew Chan and Myuran Sukumaran at the command of the Indonesian President Joko Widodo. Their lives were ended at 12.25am on 29 April 2015.

Remembering Myuran Sukumaran and Andrew Chan
Andrew Chan and Myuran Sukumaran were convicted drug smugglers but in the 10 years leading up to their deaths, they completely reformed. Andrew became an ordained Christian minister inside his Bali prison. Myuran expressed his growing faith in his art.

On their journey, they were accompanied by two extraordinary couples: Salvation Army chaplain David Soper and his wife; and the Rev Christie Buckingham and her husband Pastor Rob Buckingham of Melbourne’s Bayside Church. Rob Buckingham became a friend of this program, where he was a voice of reassurance in dark times. 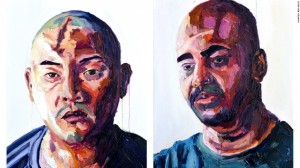 From an ABC Radio interview with Rob Buckingham.

Myu by his nature has been a quieter person, but in more recent times has become very deep in his faith as a Christian. I think for both of them the strength of their faith came shining through. They realised that they have done the wrong thing in the past. They accepted the fact that they were caught and incarcerated. They’ve both completely reformed their own lives and were working very strongly at reforming others.

All they or anybody else was asking was that these two men would be left in prison for the rest of their lives in Indonesia so that they could continue the work of helping to reform and rehabilitate other people.

This blog entry will post on the day of Myuran Sukumaran’s funeral.

Sukamaran was murdered alongside Andrew Chan and six others at 12.25am on 29th April. All refused to be blindfolded and sang Amazing Grace as they were taken to be shot.

“I am not sure where you were as the men you ordered to kill my son, and seven others pulled the trigger but I am sure you were far away,” wrote Raji Sukumaran.

“My son died knowing all his loved ones were close by waiting in a hotel room to hear the news that he had been executed.”

She also revealed one of Myuran’s final words were in prayer for Indonesia and said she hoped she could “help other people or their families in some way as they sit and wait for you to order their deaths”.

I watched as over the last four months you tortured him by making jokes about his life, making him guess the night he would be taken, openly discussing the way in which he would die, parading and humiliating our family.

I know as I write this letter, the death of our children will not make any difference to drug trade in Indonesia. I am sure you know this, and that your reasons for taking these 8 lives had nothing to do with preventing drugs and everything to do with your politics.

As I finish this letter I pray for the many other men and women whose lives are in your hands, especially those on death row. I pray that you will have the courage to look beyond the politics for they too have families who love them despite their mistakes.

The funeral of Andrew Chan, the Australian recently murdered in Indonesia was held this morning.
The funeral for Myuran Sukumaran who was murdered alongside him will be held tomorrow.

Wife recites letter written to Chan on day of execution

Febyanti Herewila, who Chan married two days before his execution, received a standing ovation after speaking at the service.

She recited a letter that she wrote to Chan on the day of his execution.

“Darling keep singing when they take you. I love you, I’ll see you soon, death cannot separate us,” she said.

She praised Chan for his strength throughout the ordeal, saying “no-one could ever face death like him”.

“Andrew refused to cover his eyes and he even wore his glasses that night,” she said.

“He hates wearing his glasses, [but] that night he chose to wear them because he wanted to look them in the eyes”.

After the ceremony there was a private cremation.

Chan was executed alongside fellow Australian Myuran Sukumaran and six other prisoners on the Indonesian prison island of Nusakambangan on Wednesday last week.

The two men spent nearly 10 years in detention on death row in Bali’s Kerobokan prison after they were found guilty of attempting to smuggle eight kilograms of heroin into Australia.

Prime Minister Tony Abbott said the executions were a “dark moment” in the relationship between Australia and Indonesia, and responded by withdrawing the Australian ambassador to Indonesia, Paul Grigson.

Chan expressed remorse for his crimes and, together with Sukumaran, he established a drug rehabilitation program for fellow inmates at the Kerobokan prison.

An atheist before his arrest, Chan later converted to the Christian faith, which he said helped him cope with life in jail.

The above is from an article found here

Dwi Trisna Firmansyah was one of three men that took part in a double murder. He had his death sentence overturned.

According to media reports, soon after the president granted Firmansyah clemency, he denied the same for Chan and Sukumaran.

Firmansyah, 28, was one of three killers involved in the robbery and planned murder of a shop owner and his son in April 2012, The Jakarta Post reported.

On April 16, 2012, Firmansyah and two other men broke into a man’s shop and assaulted him with a bat. The trio also killed the man’s son when he tried to help his father, the Daily Mail reported.

ABC reported that two other murderers had been granted clemency by the president.

Australian death-row prisoner Myuran Sukumaran has made a personal appeal for mercy to Joko Widodo, painting a portrait of the Indonesian president and signing it with the words “people can change”.

Sukumaran led an art studio for his fellow prisoners during his time in Kerobokan prison, where he was mentored since 2012 by celebrated war artist Ben Quilty.

Sukumaran was recently awarded an associate degree in fine arts by Curtin University. 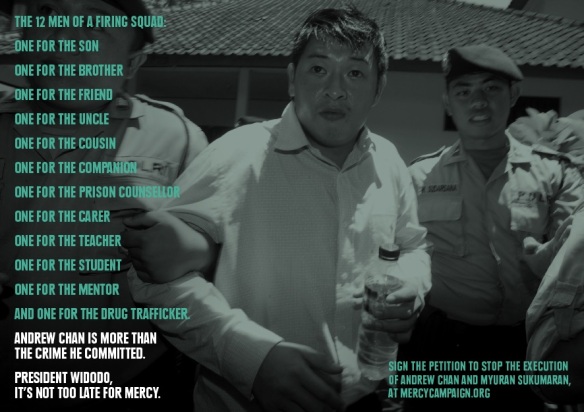 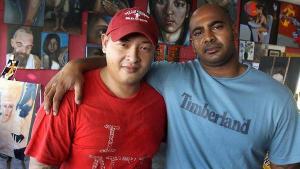