A few days ago I found an onion weed plant in our garden. It’s the first we’ve had and hopefully (although not likely) it will be the last. 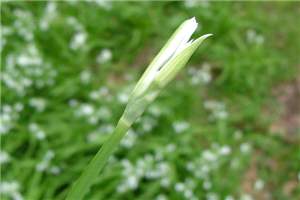 Onion weed is apparently a very invasive plant that is hard to get rid of once it’s established. Each plant produces hundreds of little bulblets that can be left behind in the soil if the plant is uprooted. It also spreads very easily from seed. If a plant is found it needs to have any flowers removed before they can produce seed.

Other suggestions I’ve seen for dealing with onion weed include continual cutting a plant to the ground which will eventually “tire” the plant out reducing the viability of the roots and bulbs. This is easier if the plant is growing in a lawn where a mower can be regularly run over it. A more brutal approach is to treat it with neat glyphosate, but many people are reluctant to use harsh chemicals of any kind in the garden. I’m guessing that the best thing is to find plants and deal with them as early as possible before they can become too established.

One possible source of our onion weed invasion was discovered last night. A while ago we bought some potted nerines from a nearby market. We found a second onion weed plant growing in one of the pots. This could have been the result of seed transferred from elsewhere after we bought the nerines or it may have been there in the pot all along. It has made us more wary of where we buy plants in the future.

[There are several plants that go by the name “onion weed”.  The one I’m referring to seems to be Allium Triquetrum.