Again I advise readers to access the WHOLE original article via the link at the end of this excerpt. 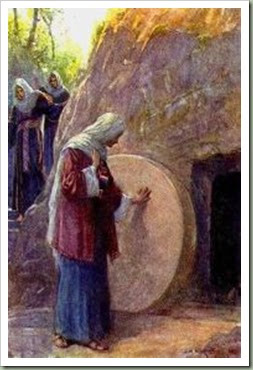 I write on the Saturday of Easter weekend (as the westernised version of events has it) and it is no coincidence I am sure that in my recent re-reading of the gospel of Matthew I arrived today at the final two chapters, the account of the trial, crucifixion and resurrection of the Son of God.

As always, the bible text itself corrects so many popular bible myths that have been introduced over the centuries. We must not base our beliefs on myths or religious paintings, but the word of God.

I learned the other day that opening the fridge on the Sabbath can cause problems. It’s because of the refrigerator light. Apparently it’s related to Sabbath prohibitions associated with electrical switches. As far as I can determine it has something to do with the Sabbath day commandment against lighting a fire in a person’s home (Exod 35). Engaging a switch to complete an electrical circuit is apparently equated with lighting a fire in modern Jewish tradition.

Of course there are ways and means of getting around the fridge light problem, such as removing the light globe. Or maybe an easier way is using that indispensable product with 1001 uses: duct tape. A small strip can be used to hold down the switch, so that it remains in the closed-door position, thereby ensuring the light remains unilluminated.

So, what’s so important about this information and why do I mention it?

Firstly, I have nothing against Jews maintaining their own traditions, whether for religious or cultural reasons. I also have no objection to Messianic Jews continuing those traditions after they come to faith in their Messiah Jesus. It’s not up to a gentile like me to insist they have to abandon their cultural ways and adopt a “Christian” way of life, just as there is no need for any other cultural group to abandon non-sinful aspects of their lifestyles. And apart from the inconvenience to those personally involved, avoiding electrical switches on the Sabbath does no one any harm.

While the specific example of the fridge light may seem minor, it needs to be recognised that the association of light switches with fire starting is a REINTERPRETATION of scripture, and not an actual directive from scripture. And many problems arise when scripture is liberally re-interpreted to mean something other than what is actually written.

Adding extra conditions to Sabbath observance effectively CHANGES the significance and purpose of the Sabbath. In some cases, those conditions actually contravene the Sabbath, where observing man’s tradition DECREASES the rest from work that the Sabbath was supposed to provide. (I’ve heard of people climbing several flights of stairs rather than take the elevator, due to the same view of using electric switches.)

A choice to observe the Sabbath BIBLICALLY can lead to difficulties for some because scripture doesn’t go into great detail about how it should be done. There aren’t long lists of directions and procedures to follow. The instruction that IS given can more or less be condensed to two main aspects: 1) rest from work and 2) devote the day to God. But for some reason man DOES love to create, follow and enforce religious procedure and ritual.

The significance of a day of rest from work can be found by looking at WHEN the command to observe the Sabbath was first given, and TO WHOM that command was given. The following reference gives a clue:

“Remember that you were slaves in Egypt and that the Lord your God brought you out of there with a mighty hand and an outstretched arm. Therefore the Lord your God has commanded you to observe the Sabbath day.” (Deuteronomy 5:15)