After the serious content of my recent posts, it seems a bit out of step to write about this. But day to day life goes on, so I wanted to report an enjoyable experience from this morning.

Since we had our first sighting of the International Space Station (ISS), Gloria and I have followed up every opportunity to see it when it passes over our town.
I registered with NASA’s Spot the Station so I would receive email advices of when it could be seen.

Recently I found that the Spot the Station page lists a lot of potential sightings that don’t lead to email notification. The emails only alert the recipient to the best opportunities to see the Station, those of longer duration, when it passes almost directly overhead.

For the past few weeks we’ve been noting the lesser sightings and have seen ISS more often than we expected. Sometimes those fainter, more distant views can be more rewarding as its not so easy to spot.

Last night I received an email forecasting one of the better sightings, however the ISS is now in part of its orbit cycle that brings it overhead very early in the morning, so we’ve not been following its progress in recent days, choosing sleep over sightings.

This morning we chose to lose sleep.
There was the possibility of something special.

Around midnight our time, a crew of three launched from Baikonur, Kazakhstan heading for the ISS, where it would dock around five hours later. That would be more or less the time the ISS would pass over our place.
Would we be able to see anything of the much smaller Soyuz capsule as it approached the Station?

The Spot the Station site indicated that the Soyuz ought to be visible if conditions were right – with the very same location and time details as the ISS, so clearly it would be close to the Station.

At 5.14 am the ISS appeared quite brightly in the North Western sky, coming towards us. For the first time I’d decided to take our binoculars, but they weren’t easy to use to watch a small moving target.
Gloria had a lot of trouble and couldn’t even find the station through the lenses. 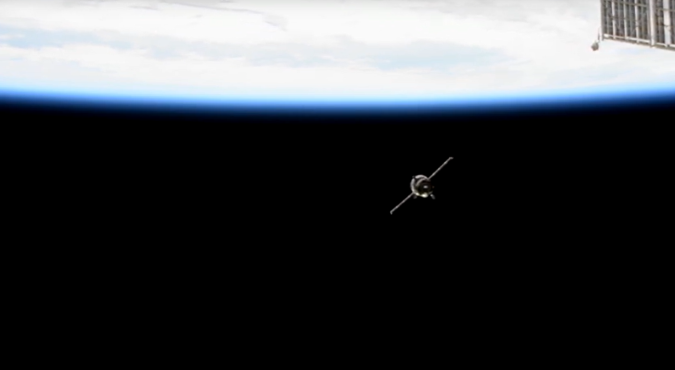 Soyuz approach as seen from ISS

With the naked eye, all I could see was the brightness of the ISS, but as it passed almost directly overhead I tried the binoculars again. And travelling along just in front of it was a small but distinct light: the Soyuz capsule on its docking approach.

I was very happy when Gloria took the binoculars and despite her earlier failure, was also able to find the Station and its tiny companion.

One thought on “We Saw a Soyuz”