American evangelicalism has long been seduced by the corrupt hybrid of nationalistic religion and conservative politics.

But I was still stunned to see a respected bible teacher like Bill Randles saying something like this: “Donald Trump emerged, promising sane things…”*.

That anything coming out of the mouth of Donald Trump during any stage of his presidential campaign could be described as “sane things” and especially by a professing Christian leader shows how incredibly far US evangelical Christianity has fallen.

The recently unearthed and broadcast videos of Trump in which he speaks of his celebrity status enabling him to get away with sexually assaulting women has not really revealed anything new about his character that hadn’t already been revealed in his public speeches.

Whatever comes out of the current presidential campaign, God is giving America, and especially the US evangelical church the type of government it deserves. 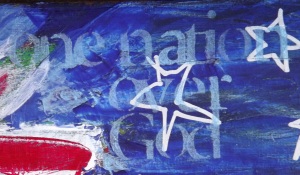 74 thoughts on “Reaping What Was Sown.”