Dwi Trisna Firmansyah was one of three men that took part in a double murder. He had his death sentence overturned.

According to media reports, soon after the president granted Firmansyah clemency, he denied the same for Chan and Sukumaran.

Firmansyah, 28, was one of three killers involved in the robbery and planned murder of a shop owner and his son in April 2012, The Jakarta Post reported.

On April 16, 2012, Firmansyah and two other men broke into a man’s shop and assaulted him with a bat. The trio also killed the man’s son when he tried to help his father, the Daily Mail reported.

ABC reported that two other murderers had been granted clemency by the president.

I have an overriding assumption about life: People are stupid.
This is a key point to grasp about life. It’s also key to remember you and I are people. I am stupid. You are stupid. We’re all stupid. That being the case, I don’t trust people. I find people hard to believe. My brain seeks someone to believe who is trustworthy. People are not trustworthy. Therefore, I must believe someone who isn’t a people. God is not a people, therefore, God seems like a good person to trust. So, how do I know the Bible is the trustworthy-God’s book? Why not the Koran? This has a long answer. I’ll summarize: I’ve read the other books claiming to be God’s words. They sound too much like people.

Australian death-row prisoner Myuran Sukumaran has made a personal appeal for mercy to Joko Widodo, painting a portrait of the Indonesian president and signing it with the words “people can change”.

Sukumaran led an art studio for his fellow prisoners during his time in Kerobokan prison, where he was mentored since 2012 by celebrated war artist Ben Quilty.

Sukumaran was recently awarded an associate degree in fine arts by Curtin University. 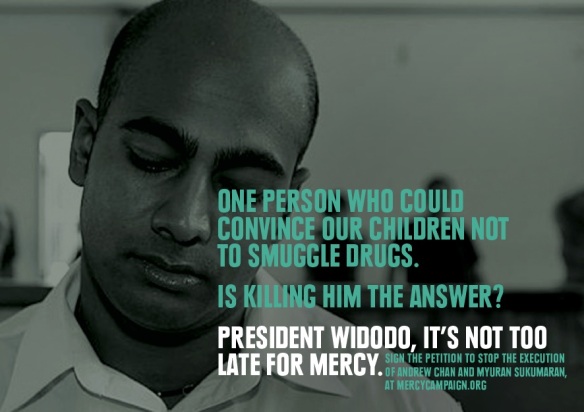