My art journey continues, and I love the learning process. Recently I’ve been looking for the work of successful artists with a similar approach to the one I’m developing. It’s not that I want to copy anyone else; I want to be inspired and to find ideas regarding technique.

One of my recent discoveries is Carol Bomer (http://www.carolbomer.com/index.cfm ) whose work expresses her faith in God. I especially like the way she incorporates text into her paintings, painting over newsprint and pages of books, and adding written text within the painted areas.

In some of my very early paintings I tried to incorporate words cut from newspapers and also printed biblical text. I was happy with the result at the time but those paintings were clearly the product of someone gaining familiarity with his materials. I like the change in physical textures created when different materials are used on the canvas, as well as the effect of partially hidden images, not entirely identifiable, that suggest meaning to be discovered.

See here for a Carol Bomer painting I particularly like:
http://www.carolbomer.com/painting.cfm?ID=322

The present church is powerless but it won’t admit there’s a problem. It continues with a “business as usual” attitude and most people will remain satisfied and not be challenged. The role taken by today’s church is one of justifying and reinforcing our status quo – making us feel comfortable about ourselves and where we are.

In the west we take the view that we are experiencing God’s blessing when in reality we rob ourselves of His blessing through our satisfaction with things of far less value.

I’m sure many over the years have seen me as a thorn in their side (after all I’ve been accused of being a servant of Satan more than once) because I have challenged their comfortable theological position. I haven’t done that because I feel I am more right than them – it’s out of a feeling of desperation, to get to the TRUTH, to live in the truth and to be part of a body of believers who are genuinely interested in living the truth.

I only speak/write passionately about those few things that I myself have learned and come to recognise as truth – often after I’ve made a 180 degree turn around from an earlier belief I had been taught.

For some time the single most important truth I’ve tried to get across is to abandon proof text based theology, to stop trying to “interpret” scripture to fit our established theology, and to let scripture speak for itself in its complete context. However it is much easier to swallow and regurgitate what others teach than it is to seek and trust God for ourselves.

I’ve been discussing the different versions of my “Eloi” painting with the friend who introduced me to art. He gave me some very good advice that I hope I’ll follow in the future. Instead of trying to improve something that’s already quite good – start again on a new canvas and introduce those “improvements” into the new version.

I suppose my hesitation to do that in the past has been the fear that I wouldn’t be able to recapture those parts of the original work that I really liked, but I now realise that isn’t important. Who knows, I might even improve on THOSE elements as well as (hopefully) the parts I hadn’t liked in the original.

Looking back to the Eloi painting – I have lost a very good original version, I have a photo of a less impressive (but not too bad) second version, and I have a final canvas not as good as the original but quite different to the second. If I’d approached it in the way my friend has now advised, I could have had a series of three similar paintings of the same theme and been much more satisfied with the work I’ve done over the past week.

Am I ready to learn from past mistakes?

Here lies a cautionary tale related to the painting mentioned in my previous post. After spoiling the original through over working, I tried to rescue something of worth from the painting. While I’m reasonably happy with what I now have, that contentment quickly evapourates when I see photos of different versions side by side. My only consolation is that the newer version looks better “in the flesh” than it does in the photo.

I suppose I can therefore try to convince myself that the earlier version really looks far better in the photo than it ever did on the canvas. 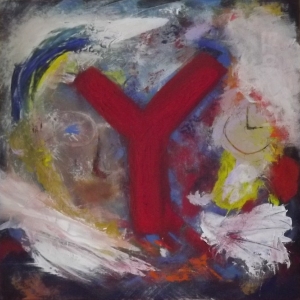 Over the weekend I created one of my best ever paintings. And then I tried to add a bit more, to tweak this bit and that bit and I spoiled it. Unfortunately I didn’t take a photo of the painting at its best. The following was taken mid-tweak.

I then tried to repair the damage I’d done and made things worse.

Often people use claims of hearing from God to add authority to what they have to say; so if we reject their message the inference is we are rejecting God. It is the kind of tactic used by so many false teachers and false prophets.

At one time I was quite casual in my use of terms like “the Lord showed me” and “the Lord taught me” and “the Lord revealed to me”, but I later realized that the Lord had done no such thing because some of those “revelations” were totally contrary to scripture (but my knowledge of scripture at that time was limited to proof texts drummed into me by the teachers I regularly listen to – and those texts mostly did not mean what they were being used to support).
I thought I was hearing God’s voice but it was man’s – because that is all I ever listened to.

These days I am more confident of what IS God’s voice but I am less likely to say “God told me…” or “God showed me…” I just try to speak (or write) His truth, but if I do get it wrong, I’m not crediting God with my mistakes and I pray that He will make me aware of them.

Scripture makes it clear how many people would be unwilling to accept truth even when it is made most clear. Examples that come straight to mind are:
1)     The statement “If they do not hear Moses and the prophets, neither will they be persuaded though one rise from the dead”
2)     The fact that Jesus’ physical presence and personally witnessing His teaching and miracles was not enough to convince so many of who Jesus is.
3)     When confronted by God’s wrath, living men (who recognize the truth of what they are experiencing) are more willing to have mountains fall on them than to admit their error and turn to Him in repentance.

So many people resist truths that affect THEM personally requiring action from THEM. They are more likely to shout AMENs to words that require change from others. Blanket condemnation of the “lukewarm-church” is popular among those who want to portray themselves as being red hot for God, and everyone else much cooler. But words about being blind wretched and naked are not so popular when the finger is being pointed, more personally, in our own direction.

This year  Easter and Passover coincide.

May our minds and hearts be focused on Jesus, the one Paul described as “Christ our Passover”  and not on chocolate. May we look to what was given by God, and not to man-made alternatives.